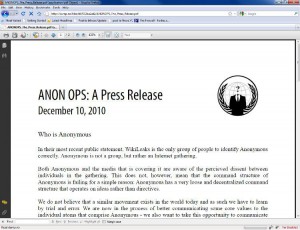 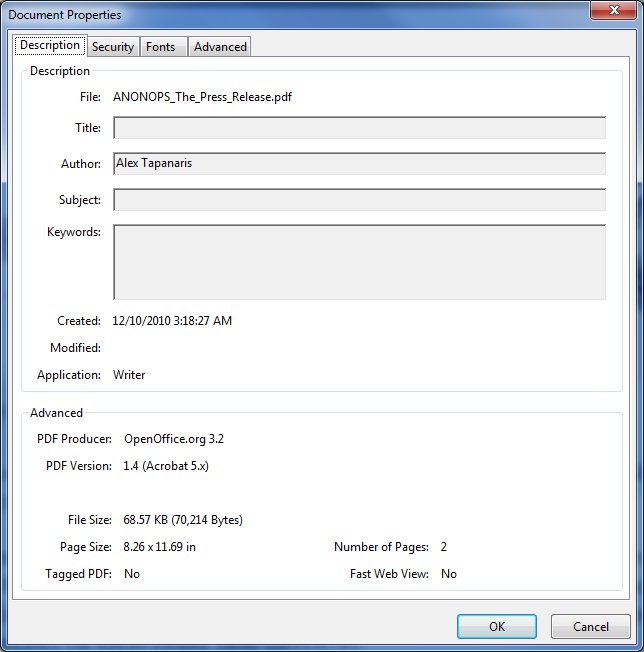 Who is Anonymous In their most recent public statement, WikiLeaks is the only group of people to identify Anonymous correctly. Anonymous is not a group, but rather an Internet gathering.

Both Anonymous and the media that is covering it are aware of the percieved dissent between individuals in the gathering. This does not, however, mean that the command structure of Anonymous is failing for a simple reason: Anonymous has a very loose and decentralized command structure that operates on ideas rather than directives.

We do not believe that a similar movement exists in the world today and as such we have to learn by trial and error. We are now in the process of better communicating some core values to the individual atoms that comprise Anonymous – we also want to take this opportunity to communicate a message to the media, so that the average Internet Citizen can get to know who we are and what we represent.

Anonymous is not a group of hackers. We are average Interent Citizens ourselves and our motivation is a collective sense of being fed up with all the minor and major injustices we witness every day.

We do not want to steal your personal information or credit card numbers. We also do not seek to attack critical infrastructure of companies such as Mastercard, Visa, PayPal or Amazon. Our current goal is to raise awareness about WikiLeaks and the underhanded methods employed by the above companies to impair WikiLeaks’ ability to function.

What is Operation: Payback As stated above, the point of Operation: Payback was never to target critical infrastructure of any of the companies or organizations affected. Rather than doing that, we focused on their corporate websites, which is to say, their online “public face”. It is a symbolic action – as blogger and academic Evgeny Morozov put it, a legitimate expression of dissent.

The background to the attacks on PayPal and the calls to attack Amazon.com Amazon, which was until recently WikiLeaks’ DNS provider, was one of the first companies to drop support for WikiLeaks. On December 9th, BusinessInsider.com reported that Amazon.co.uk were hosting the recently leaked diplomatic cables in e-book form. (Amazon.co.uk has since ceased selling the bundle of the diplomatic cables.)

After this piece of news circulated, parts of Anonymous on Twitter asked for Amazon.com to be targetted. The attack never occured.

While it is indeed possible that Anonymous may not have been able to take Amazon.com down in a DDoS attack, this is not the only reason the attack never occured. After the attack was so advertised in the media, we felt that it would affect people such as consumers in a negative way and make them feel threatened by Anonymous. Simply put, attacking a major online retailer when people are buying presents for their loved ones, would be in bad taste.

The continuing attacks on PayPal are already tested and preferable: while not damaging their ability to process payments, they are successful in slowing their network down just enough for people to notice and thus, we achieve our goal of raising awareness.